Greg's byline has appeared in the New Republic, Village Voice, Salon, Guardian Observer, The Root, American Legacy, Integral Life, UPTOWN, and in the New York Daily News as jazz columnist. He's also a producer, curator, and lecturer: Greg has been a featured speaker at Harvard, Columbia, the New School, and Hamilton College. He is the CEO of the Jazz Leadership Project, which applies the principles and practices of jazz to leadership, high-performance teams, and inclusion dynamics.

Swinging through the core of American experience by exploring Albert Murray's genius.
The Amiel Show (podcast) Link to Story

A new podcast on race in America, featuring Greg's refreshing take on a complex topic.
The Amiel Show (podcast) Link to Story

Greg dives into the perspective of Ralph Ellison and his peerless value in our time of national crisis.
Integral Life (podcast) Link to Story

The young musical director of The Late Show With Stephen Colbert relates his vision and passion.
The Root (feature) Link to Story

Reading Albert Murray in the Age of Trump

Albert Murray's genius posed the blues idiom as a path to realize our democratic principles with style.
The New Republic (essay) Link to Story

The icon called "Q" is the Alpha and Omega of Popular Music. But in his eyes, it's bigger than him.
UPTOWN Magazine (profile) Link to Story

Wynton Marsalis: The Music of America

Greg writes about the meaning and values at the core of Wynton Marsalis’s stellar body of work.
SONY Masterworks (liner notes) Link to Story

Tony Bennett: Life Is a Gift

Living legend Tony Bennett on why “What I do now is gravitate towards truth and beauty.”
New York Daily News Link to Story
View More Stories

Greg's byline has appeared in the Village Voice, Salon, Guardian Observer, The Root, American Legacy, New Republic, Uptown, among others, including the New York Daily News, for which he was the jazz columnist for several years. As an editor, Greg has worked with Forbes Media's American Legacy Woman magazine, and was the founding Editor-in-Chief of Harlem World magazine. In 1995, the New York Association of Black Journalists selected him as winner of the Critique and Review newspaper award for "Marsalis Trumpets Truth as He Sees It," his review of Marsalis's first book, Sweet Swing Blues on the Road.

Greg was a featured writer in "Albert Murray and the Aesthetic Imagination of a Nation," the first book-length study of the writing, work and life of blues idiom and jazz Renaissance Man Albert Murray. In May 2016 the University of Minnesota published Murray Talks Music: Albert Murray on Blues and Jazz, edited by Paul Devlin with the afterword written by Greg.

He's also worked in front of the camera and behind the scenes in video production. After graduating from Hamilton College with a B.A. in Public Policy and Minor in Music, Greg co-produced and directed several documentaries. In 1990, he won in the Ethnic Expressions category of the Hometown USA Video Festival for: "Holistic Health Care in the African American Community."

Greg has been a producer and host on WBAI and WVOX radio in New York, and was on-air host and co-producer of two seasons of Jazz it Up!, an online jazz news and entertainment series. Jazz it Up! was nominated as finalist in the Outstanding Long Form-Entertainment category for National Academy of Television Arts and Sciences-sponsored Global Media Award.

In 2016, Greg was host and curator of a four-part series for the National Jazz Museum in Harlem, “Jazz and Contemporary Culture.” On February 13, 2016 he presented an essay at an Albert Murray Symposium that he co-organized with the Center for Jazz Studies at Columbia University. On Feb. 16, 2016 he co-presented, with fellow cultural journalist Greg Tate, a re-animation of a debate between Ralph Ellison and Amiri Baraka over the meaning of the history and practice of black American music, at Harvard University.

More recently, Greg has been interviewed on several programs on his distinctive approach to confronting and transcending the problem of race in the United States, and has launched an enterprise, the Jazz Leadership Project, for which he serves as Chief Executive Officer. 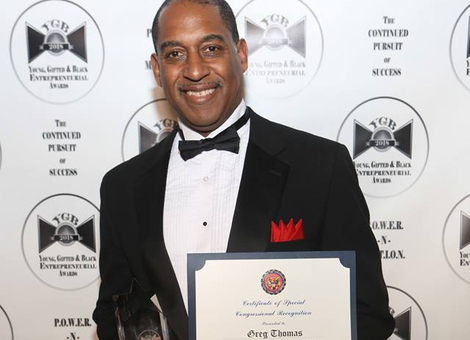